A 13F is a report filed quarterly by institutional investment managers that satisfy the following criteria:

SEC's EDGAR database is a convenient and quick way to find 13Fs, allowing you to narrow down the forms by investment manager.

Origins of the 13F

After the great market crash of 1929, Congress instituted additional regulation to bolster investor confidence and root out deceptive practices that lie at the center of the historic loss of wealth in the US economy. The Securities Exchange Act of 1934 represented a step towards increased transparency, and Section 13(f) specifically addressed the availability of the public to gain access to information on the securities holdings of institutional investors. The full text of the Securities Exchange Act can be found here, but the piece of the relevant portion within Section 13(f) states:

Every institutional investment manager which uses the mails, or any means or instrumentality of interstate commerce in the course of its business as an institutional investment manager and which exercise investment discretion with respect to accounts holding equity securities of a class described in section 13(d)(1) of this title having an aggregate fair market value on the last trading day in any of the preceding twelve months of at least $100,000,000 or such lesser amount (but in no case less than $10,000,000) as the Commission, by rule, may determine, shall file reports with the Commission in such form, for such periods, and at such times after the end of such periods as the Commission, by rule, may prescribe, but in no event shall such reports be filed for periods longer than one year or shorter than one quarter. Such reports shall include for each such equity security held on the last day of the reporting period by accounts (in aggregate or by type as the Commission, by rule, may prescribe) with respect to which the institutional investment manager exercises investment discretion (other than securities held in amounts which the Commission, by rule, determines to be insignificant for purposes of this subsection), the name of the issuer and the title, class, CUSIP number, number of shares or principal amount, and aggregate fair market value of each such security.

What is Excluded from 13F Reporting?

While savy investors may look to 13F filings to see what their favorite managers have in their portfolios, there are some important exclusions from the reporting requirement that bears mention. The three most prominent exclusions are:

In particular, the last point can prove significant, as a manager may put on a long position (buy stocks) to hedge some other short bet that isn't disclosed on a Form 13F, and investors may incorrectly interpret the security being held as a bullish view from the investment manager. As such, 13Fs should always be interpreted with some healthy skepticism when using it as a tool for your personal portfolio. It is often better to supplement a 13F with a fund's investment letter detailing the reasons behind a manager's positioning. For example, Warren Buffett's shareholder letters provide

How to Use 13Fs In Your Investing

In this section, we'll walk through how you can navigate the SEC database to find the 13F holdings from an investment manager. For this exercise, we'll use the private investment firm Scion Asset Management, LLC, led by Dr. Michael J. Burry who got much of his fame from correctly predicting the dangers and subsequent collapse of the US Housing Market during the Great Recession of 2007-2009. His role would later be portrayed by Christian Bale in the 2015 comedy-drama, The Big Short.

This will take us to a screen for filings submitted by Scion, in a table format. Depending on when you run this search, your output may differ significantly from what is present below: 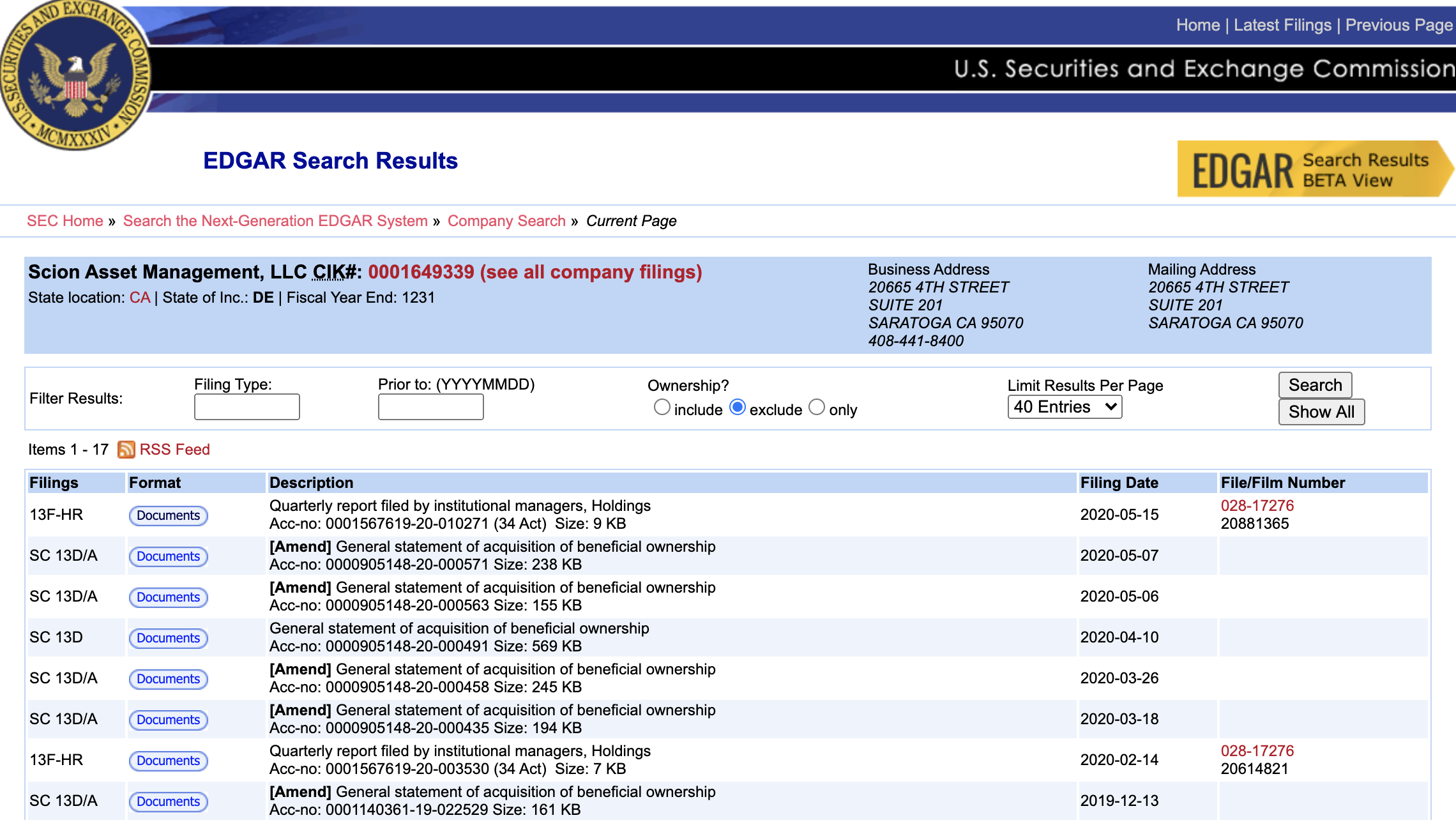 We can narrow down the reports by entering '13F' in the field Filing Type, but since a 13F-HR (signifying a Holdings or Combination Report) is the latest available report from Scion, this is a step we can omit, instead clicking directly onto to the 13F-HR document. 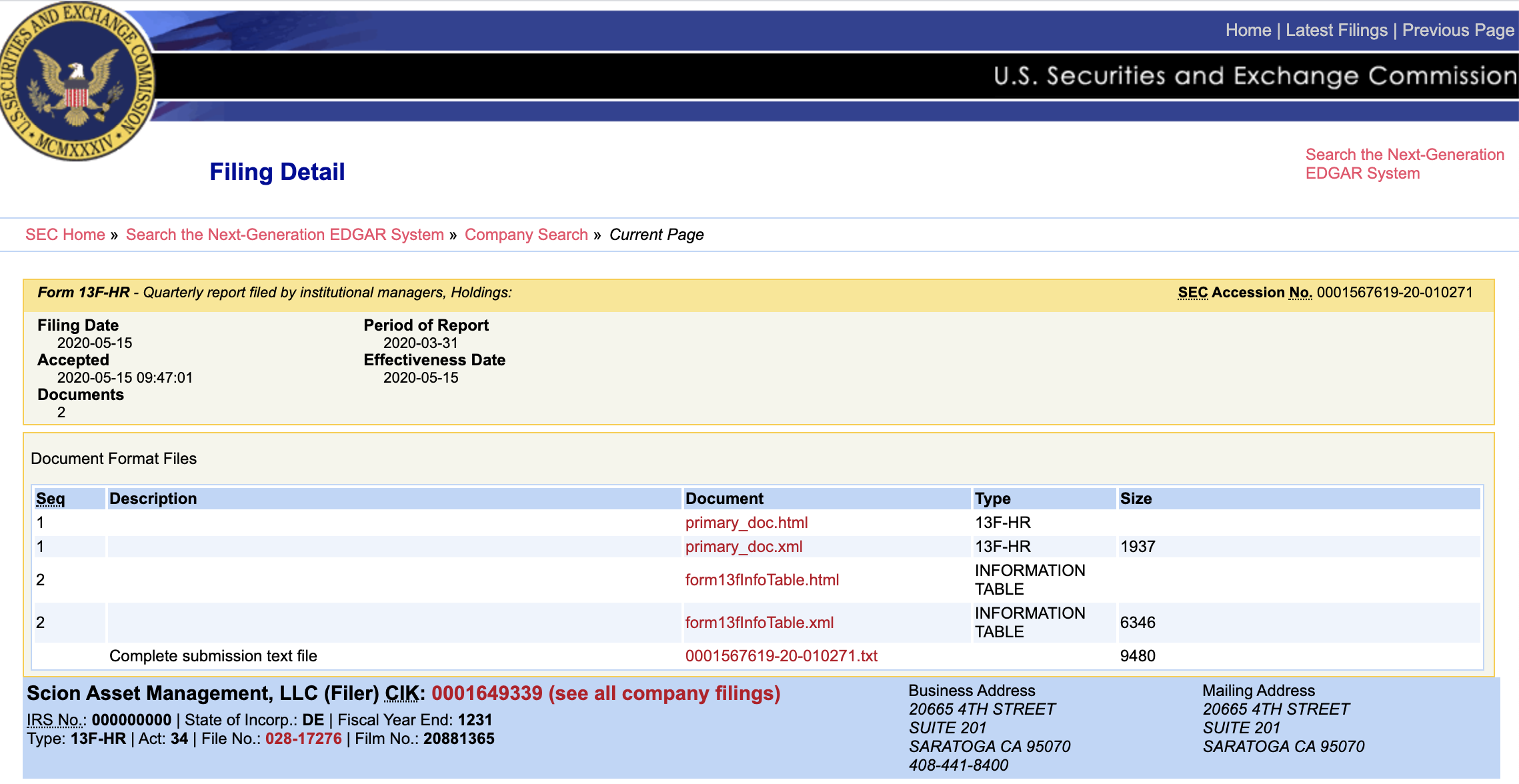 For the purposes of this exercise, we'll look at the information table in html format. 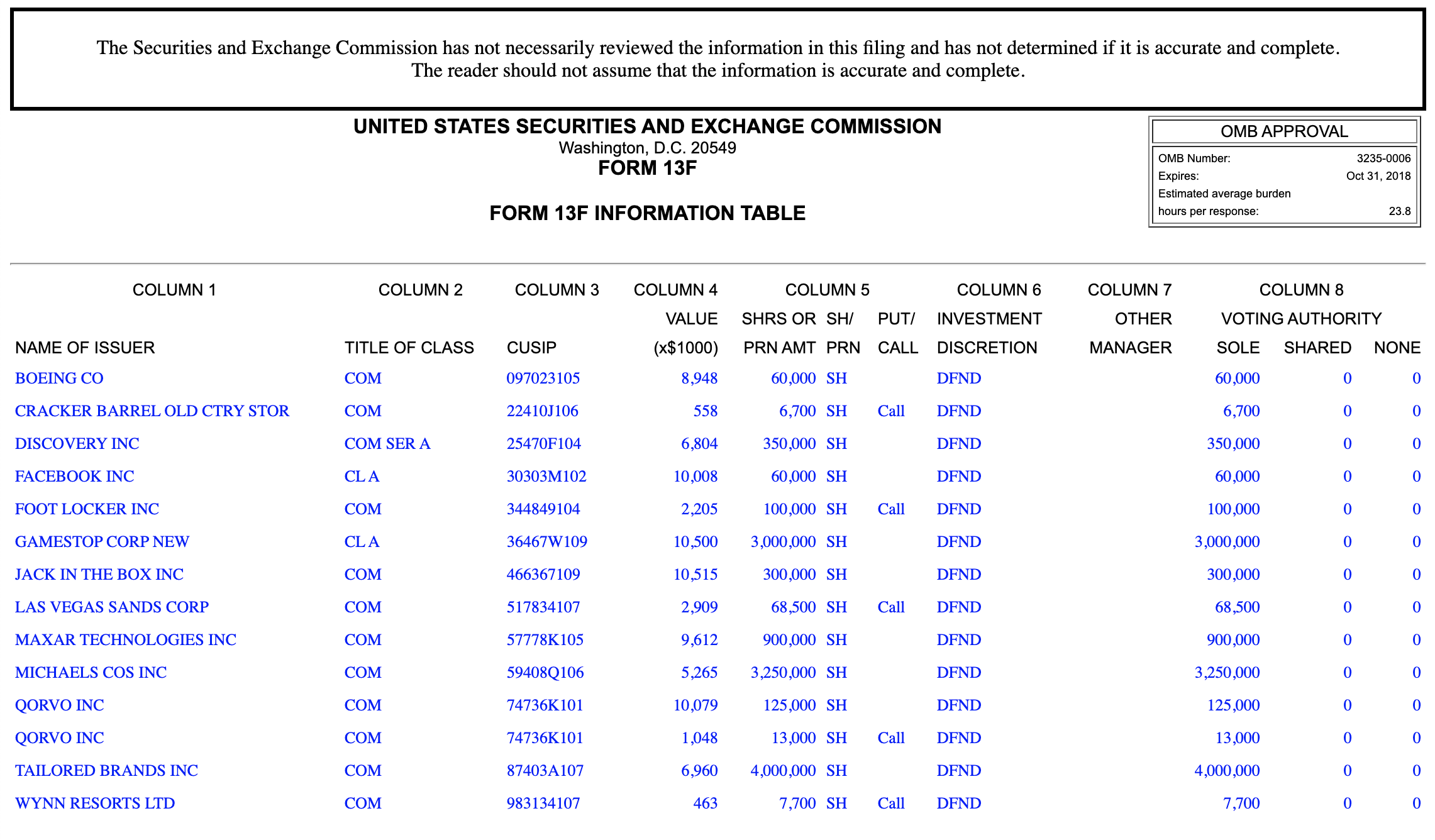 And there it is, the long positions held by Scion for the first quarter reporting period of 2020. We see both the share count and value of the shares for each security. We can further compare this to a filing in the previous quarter to back out any new trades put on in the first quarter.

One important disclaimer on the page with the Form 13F Information Table is SEC's own disclaimer at the top of the screen. It reads:

Here we're presented with an uncomfortable truth, in that the SEC doesnt have a mechanism in place to consistently verify the truth in the filings. There have been many stories in the past detailing false representation of company holdings (i.e. Bernie Madoff), so it's important to look at this limited data with a healthy dose of skepticism. However, combined with due diligence on company financials and investor letters often posted by the major institutional players in the market, the 13F can offer insight into the style of investing that works best.